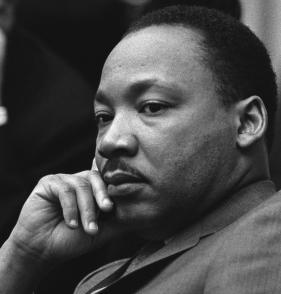 The Honorable Minister Louis Farrakhan has asked all people to study the last speeches of the Rev. Dr. Martin Luther King, Jr., and to reflect on the evolution of his message—from one of an integrationist “Dreamer” in 1963, to one of a true wide-awake revolutionary in 1968 when he was murdered. It is clear that Dr. King began to consider The Teachings of The Most Honorable Elijah Muhammad had profound relevance to the struggle for Black freedom in America. Dr. King and his wife Coretta met with The Hon. Elijah Muhammad at his Chicago home on February 24, 1966. Privately, Dr. King indicated a true shift in his belief that the pursuit of “integration” through “non-violent” civil rights struggle would be the answer to the righteous demands of his oppressed people. In the last days of his life, Dr. King confided in his friend Harry Belafonte:

In 1967, Dr. King, asked, “Why does White America delude itself, and how does it rationalize the evil it retains?” He said White people’s belief in the fairness of America “is a fantasy of self-deception and comfortable vanity.”
His indictment of White America grew harsher and unsparing:
“White Americans left the Negro on the ground and in devastating numbers walked off with the aggressor. It appeared that the White segregationist and the ordinary White citizen had more in common with one another than either had with the Negro.”
Incredibly, he even conceded, “there are points at which I see the necessity for temporary separation as a temporary way-station to a truly integrated society.”
By 1968, Dr. King was unequivocal about the country and the war to which White America and many negro leaders were irrevocably faithful:
“And I am sad to say that the nation in which we live is the supreme culprit. God didn’t call America to engage in a senseless, unjust war, as the war in Vietnam. And we are criminals in that war. We have committed more war crimes almost than any nation in the world, and I’m going to continue to say it.”
In his very last speech in Memphis in the midst of the striking sanitation workers on April 3, 1968, Dr. King was speaking of BLACK RETALIATION against the forces of wickedness using “the power of economic withdrawal.”
“Up to now,” he taught, “only the garbage men have been feeling pain; now we must kind of redistribute the pain.”
The United States government spied on Dr. King and attempted to make his life a living hell and ultimately, they were responsible for the death of our brother on that Memphis motel balcony at 39 years of age. His intellectual and spiritual journey into the mind of God may have been nearly complete. Among Dr. King’s personal effects were notes of a speech he was preparing to deliver on that Sunday titled: “Why America May Go To Hell.”
It is TRULY time that we acknowledge the brilliance of the Rev. Dr. Martin Luther King, and to rescue his legacy from those who would misuse his words to send Blacks into that “burning building.” 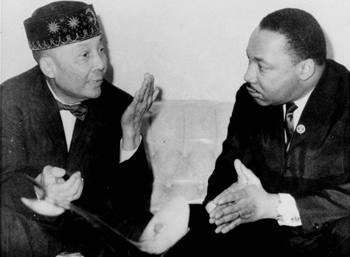 Below is a partial list of public speeches given by Dr. King since that meeting with the Honorable Elijah Muhammad.   This list will expand in the coming weeks.

A rough draft of an address delivered by Dr. King to the parents of Jenner Elementary school located in Chicago, Ill. Dr. King advises a plan to counteract deplorable school conditions as well as the misappropriation of tax dollars. (http://www.thekingcenter.org/archive/document/jenner-school-parents)

Transcripts of Speeches and Statements Along The Meridith March

Dr. King discusses the recent violent challenge faced by Blacks and the SCLC in which they have experienced a “threat of murder.” This issue has motivated Dr. King to continuously press for social change and maintain the responsibilities in Mississippi. (http://www.thekingcenter.org/archive/document/transcripts-speeches-and-statements-along-meridith-march)

In this transcript of Dr. King’s speech to the citizens of Yazoo City, he addresses the issues of poverty and racism within the state. (http://www.thekingcenter.org/archive/document/transcript-mlks-rally-speech-yazoo-city-mississippi)

In Chicago, Dr. King asks for the economic and social betterment of the individuals living in the “slums” of the city.

Demands of the Chicago Freedom Movement

Dr. King placed a list of demands on the door of the Chicago City Hall in order to gain leverage with city leaders.

Delivered at the Tenth Annual Convention of the SCLC, Dr. King addresses several elements of the Civil Rights Movement as he discusses the successes, plans, goals, and vision of the SCLC in relation to the wider movement it represents.

At its Tenth Annual Convention, the SCLC Board adopts a resolution calling upon President Johnson and Congress to reverse a vote on Title IV (Open Housing) of the Civil Rights Act of 1966 that effectively permits discrimination in the sale or rental of private housing. (http://www.thekingcenter.org/archive/document/sclc-resolution-1966-civil-rights-act)

Dr. King enforces the mission and organizational structure of the SCLC, and the “Black Power” slogan. (http://www.thekingcenter.org/archive/document/statement-mlk)

Statement on The Negro’s Political and Economic Power

Dr. King discusses the inferior political and economic power of American Blacks against the backdrop of emerging Black Power organizations. He reveals several new non-violent programs the SCLC targeted at economic and social justice: youth training and political reformation in the South.

Howard University presents Dr. King as its primary speaker for their seventh annual Gandhi Memorial Lecture in 1966. Dr. King traces the slow but meaningful progress society has made from slavery to the current civil rights movement.

Dr. King addresses the staff of the SCLC at a retreat in Frogmore, South Carolina. He divides his speech into three parts: “whence we have come, where we have come, and where do we go from here.” (http://www.thekingcenter.org/archive/document/mlk-speech-sclc-staff-retreat)

Dr. King speaks about the Chicago Freedom Movement that is mobilizing to “launch an intensive voter registration” campaign in Black communities. (http://www.thekingcenter.org/archive/document/statement-regarding-chicago-movement)

MLK Address to the United Neighborhood Houses of New York

Dr. King focuses on the need to alter the ineffective, piecemeal manner in which the government tries to fight poverty by fighting its symptoms, and instead suggest that the government channel those funds into a new “guaranteed annual income” that will help turn non-producers into consumers.

In a hearing on the plight of inner cities, Dr. King focuses on injustices in the urban ghettoes, stating that the problem is not primarily a race issue but an economic one. He calls for a rebalancing of national priorities and links the plight of America’s poor to the squandering of resources on war. (http://www.thekingcenter.org/archive/document/senate-subcommittee-urban-reorganization-statement)

Dr. King’s fourth book, “Where Do We Go from Here? Chaos or Community?” is published

“A Journey of Conscience”

Dr. King provides the many reasons he so strongly opposes the war in Vietnam. He writes of how he first felt it was important to remain silent, but gradually felt compelled to speak out, as the U.S. made no initiatives toward peace. He points at that the war abroad takes away our focus on our problems at home, and we must “combine the fervor of the civil rights movement with the peace movement.” (http://www.thekingcenter.org/archive/document/journey-conscience)

The Casualties of The War In Vietnam

Dr. King speaks at a symposium held in Los Angeles, California. He addresses the moral, social, and political causalities that arise as result of war.

Revolution In The Classroom

Dr. King addresses the Georgia Teachers and Education Association about the education of children in the South. He addresses five causes of the recent riots: white backlash, unemployment, discriminatory practices, war, and features peculiar to big cities. (http://www.thekingcenter.org/archive/document/revolution-classroom)

Dr. King discusses seven major reasons for bringing Vietnam into “a field of moral vision,” five things that the government should do to remove itself from conflict with Vietnam, and also encourages those in the churches and the synagogues to speak out against the war in Vietnam. (http://www.thekingcenter.org/archive/document/beyond-vietnam)

Three Dimensions of a Complete Life

Dr. King states that the key to an extended and fulfilling life is to live a life that is “three dimensional.” He further identifies these dimensions as: “length, breadth and height.” Dr. King proclaims these dimensions will ensure a life of self-love, community and love for God.

Dr. King provides introductory remarks to participants of the Pacem In Terris II Convocation held in Geneva, Switzerland. He addresses several moral and political concerns as it relates war and Vietnam.

Joint Statement on Violence in the Cities

Dr. King, A. Philip Randolph, Whitney M. Young Jr., and Roy Wilkins issue a joint statement urging Black Americans in cities to end the public disorder and rioting. The civil rights leaders emphasize the potential damage the urban riots pose to “the Negro population, to the civil rights cause, and to the entire nation.”

After returning from a Real Estate Brokers convention in San Francisco, Dr. King expresses appreciation for the influence radio has had in an unrepresented community of uneducated listeners who may otherwise be denied information and economic opportunity. (http://www.thekingcenter.org/archive/document/mlk-addresses-national-association-radio-announcers)

Dr. King acknowledges the help that social science can have in the quest of Blacks for equality. He identifies three areas for study: Black leadership, the efficacy of political action, and the psychological and ideological changes taking place in Blacks as a result of a decade of struggle. (http://www.thekingcenter.org/archive/document/speech-american-psychological-association)

MLK Announces The Jail Sentences Stemming from the 1963 Birmingham Demonstrations

Dr. King makes this statement regarding the arrest of himself and other leaders of the 1963 Birmingham struggle. The Supreme Court in 1967 ruled that these leaders unjustly broke the citywide injunction banning demonstrations. Dr. King urges the nation, “Take heed. Do not allow the Bill of Rights to become a prisoner of war.”

MLK Statement Regarding an Attack on the First Amendment

Dr. King addresses violations of First Amendment Rights in this statement regarding the events at Birmingham, Alabama in 1963.

Dr. King addresses the French community during his “Racial Injustice, Poverty, and War” speech. He discusses topics such as poverty, politics, war, and the government. (http://www.thekingcenter.org/archive/document/mlk-address-racial-injustice-poverty-and-war)

The Domestic Impact of the War in America

Dr. King parallels the war in Vietnam to the injustice and violence inflicted on urban dwelling American Blacks. King implores the government to reassess the nation’s domestic priorities and institute anti-poverty programs, so that the Great Society does not deteriorate into a “troubled and confused society.” (http://www.thekingcenter.org/archive/document/domestic-impact-war-america)

Dr. King announces the SCLC’s decision to lead a non-violent march on Washington protesting the government’s lack of support in providing jobs and income for impoverished Americans. (http://www.thekingcenter.org/archive/document/mlk-announces-new-sclc-march-washington-dc)

The Crisis in America’s Cities

Dr. King provides an analysis of “social disorder” and a plan of action against poverty, discrimination and racism in Urban America. Dr. King states that, “If the soul is left in darkness, sins will be committed.” (http://www.thekingcenter.org/archive/document/crisis-americas-cities)

Dr. King delivered this speech that emphasized the need to address poverty, the Vietnam War, and race relations in America.

Address at Mass meeting at the Bishop Charles Mason Temple

Dr. King challenges the Black residents of Eutaw, Alabama to participate in the upcoming SCLC Poor People’s Campaign. In this address, he urges the citizens of Eutaw to occupy Washington, D.C. in an effort to press Congress for a redistribution of wealth in America. He urges, “All ye who are tired of segregation and discrimination, come unto us. All ye who are overworked and underpaid, come unto us.” (http://www.thekingcenter.org/archive/document/mlk-address-mass-meeting-eutaw-alabama)

Dr. King addresses supporters in Jackson, Mississippi during his statewide tour for the 1968 Poor People’s Campaign. He speaks of his excitement about the number of Blacks in Mississippi that participated in the last congressional election. He emphasizes that the Poor People’s Campaign cannot be successful without a strong coalition of organizations that see the need to combat poverty. (http://www.thekingcenter.org/archive/document/speech-jackson-mississippi)

Remaining Awake Through a Great Revolution – Delivered at the National Cathedral in Washington, D.C.(http://kingencyclopedia.stanford.edu/encyclopedia/documentsentry/doc_remaining_awake_through_a_great_revolution/)

“I’ve Been to the Mountaintop” speech.

Dr. King delivers the “I’ve Been to the Mountaintop” speech at the Masonic Temple in Memphis, TN. (http://www.thekingcenter.org/archive/document/ive-been-mountaintop-1)

At sunset on April 4, Martin Luther King, Jr. is fatally shot while standing on the balcony of the Lorraine Motel in Memphis, Tennessee.

“Why America May Go to Hell” – Planned to be delivered on this date, but never delivered due to his assassination.