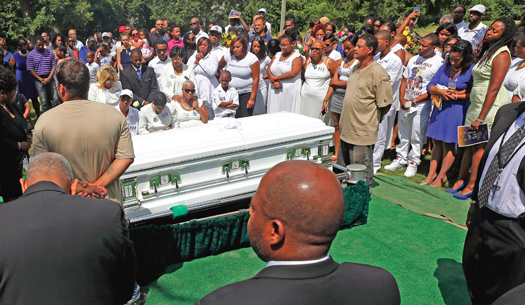 LISLE, Ill. – Family and friends of an Illinois woman found dead in a Texas jail remembered her July 25 as a “courageous voice” for social justice and promised to keep fighting for clarity on the circumstances surrounding her death.

Hundreds of people attended Sandra Bland’s funeral near the Chicago suburb where she grew up. They celebrated her life with words and songs of praise, and her mother danced in the church aisle with her arms raised. She and other mourners, though, said they were still struggling to understand how a traffic stop for failing to use a turn signal escalated into a physical confrontation and landed her in the cell where authorities say she killed herself three days later.

The Harris County, Texas, medical examiner’s office determined through an autopsy that Bland hanged herself with a plastic bag. The 28-year-old woman’s family has questioned the finding, saying she was excited about starting a new job and wouldn’t have taken her own life.

“I’m going to find out what happened to my baby,” her mother, Geneva Reed-Veal, said in remarks that brought mourners to their feet. “My baby has spoken. She’s still speaking and no, she didn’t kill herself.”

The traffic stop, which was captured on police dash cam video and on a bystander’s cellphone, and Ms. Bland’s death in custody have resonated on social media, with many grouping it with other prominent U.S. cases involving confrontations between the police and Blacks over the past year.

Ms. Bland had spoken out about that issue and others in a series of videos she posted online this year with the hashtag “SandySpeaks.”

Mourners at the funeral wore T-shirts with the tag. One person had it scrawled across a car window. Some took to Twitter with the hashtag “SandySTILLSpeaks.” 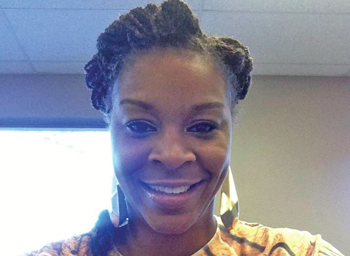 Crowds filed past her open casket to catch a last glimpse of Ms. Bland, who was dressed in an all-white suit with roses on top of her.

The controversial July 10 traffic stop appeared to become heated when Ms. Bland refused the officer’s request to put out a cigarette and his subsequent order to get out of the car. He threatened to shoot Bland with a stun gun unless she obeyed his order. The officer has been placed on administrative leave pending the outcome of an investigation.

The Rev. Theresa Dear told reporters outside the DuPage African Methodist Episcopal Church that Ms. Bland should be celebrated for standing up for herself.

“She challenged and asked the question why, ‘Why should I put out the cigarette?”’ Dear said. “She asked 12 times, ‘Why am I being arrested?’ And so we celebrate that part of her personality.”

And she said friends and family continue to doubt authorities, even after the release of documents supporting the official conclusion of suicide.

“When you are about to start a new job, when you know your family is about to bring the money for your release, when you are an activist and a fighter, you don’t take your own life,” she said.

Ms. Bland’s story so moved people that her funeral even drew some who never met her.

“I don’t know Sandra, and I don’t know what happened,” Hank Brown, of Chicago, told the Chicago Tribune. “But I do know she didn’t have to die. There’s an epidemic of police terror in this country, and people need to stand up.”

In Texas, family, friends, and supporters from the community came together days earlier in July  to honor Ms. Bland’s life at the university where she was soon to begin her new job. The service held at Johnson-Phillip All Faiths Chapel on the campus of Prairie View A&M University began with a scriptural reading from Bland’s sister, Sharon Cooper. Charles H. Lewter IV, Dean of the chapel, also shared words of comfort.  Larry Jones, the Assistant Director of the Marching Storm spoke and members of Ms. Bland’s sorority, Sigma Gamma Rho, were also present to pay tribute to her.

The memorial service concluded with words given by Ms. Bland’s mother, Geneva Reed-Veal who said although they had a somewhat strained relationship at times, they were able to clear up every issue. She recounted a road trip they took together to Memphis as recently as July 4, where Bland told her mother she had found her purpose.

“Now I know what my purpose is to go back to Texas. My purpose is to stop all social injustice in the South.” Ms. Reed-Veal revealed. “Once I put this baby in the ground I’m ready…this means war,” she reportedly said.

Social media and news websites have been buzzing since  dashcam footage from the arresting officer, Brian Encinia’s vehicle and the video from inside Waller County Jail were released to the public July 21. The officer has been placed on administrative leave pending investigation.

The video appears to show an agitated Ms. Bland boldly asserting her rights, as the officer became increasingly aggressive, forcing Bland out of the vehicle; first by opening her car door attempting to physically pull her out and then by pointing his taser at her, yelling at her to get out of her vehicle stating, “I will light you up!” This happened after Ms. Bland was heard asking why she had to extinguish her cigarette.

Video footage from inside the Waller County jailhouse was not the full timeline. The footage appeared to have been edited only showing the moment the female jail officer appears to have discovered Ms. Bland and quickly called for others to assist.

Allegations of drug use?

During a July 23, news conference Waller County officials reported “a substantial amount of marijuana in her system at the time of her death.”

Activists believe this is an attempt to smear the character of the victim, taking the focus away from the misdeeds and apparent negligence of the law enforcement officials involved in her death.

There were two booking interviews conducted on Bland in which only one included a history of a suicide attempt. One report stated that she attempted in 2014 after a miscarriage by ingesting pills. The second interview conducted indicated that Bland did not have prior history of suicide attempts.

The booking documents also showed inconsistency where the cell assignment is concerned. The cell that Bland was in was identified as the high-risk designation, which explained why she was in a cell alone. However, Ms. Bland was listed on the booking document completed by a jailer as medium risk.

(Ebony S. Muhammad contributed to this report from Texas.)