By Justice Or Else!September 24, 2015News
No Comments

BUFFALO – A broad cross section of the community gathered at a Sept. 14 town hall meeting co-sponsored by the Local Organizing Committee (LOC) of the Justice or Else! movement and the Afrikan Consciousness Workshop.

The meeting was called to discuss solutions to the most pressing family and community issues of the day, which will be compiled and forwarded as a supplement to the National Agenda of the Justice or Else! rally, to be held Oct. 10 in celebration of the 20th anniversary of the Million Man March.

The rally will be convened by the Honorable Minister Louis Farrakhan.

“This is a meeting for those who have heard and been to enough meetings where you‘re clear about what the problem is,” said Samuel L. Radford III, town hall moderator and co-chairman of the Buffalo LOC. “What this meeting is about is solution and it’s about a plan.” 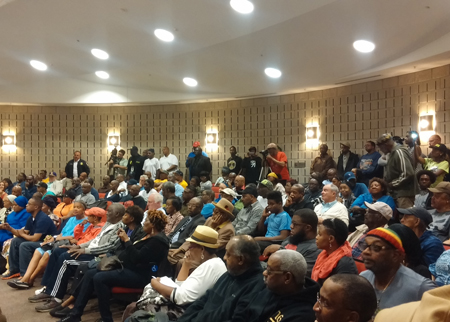 The meeting took place in a crowded Frank E. Merriweather Library auditorium where participants developed a resource asset map. A number of front line violence intervention organizations — MADD DADS, Stop the Violence Coalition, SNUG (guns spelled backwards), the FATHERS, and Buffalo PeaceMakers — were present to let the public know that they will re-commit to the continuing front line anti-violence work that they have continuously done, which has been a big reason for decreasing murder rates before the recent spike.

The most urgent issue, which is why several local government officials, local news agencies and so many people attended the meeting, is the recent spike in cities across the country.

“We wanted to let you know, don’t despair, don’t grieve.  You’ve got an army of men and women out there every day working to try to resolve Black-on-Black homicides and crime, but we still have to do more,” said Student Minister Dahveed Muhammad of Muhammad Mosque #23, a lead organizer of the town hall meeting.

“This is what the community looks like when we come together in peace to solve our own issues.  No one’s waiting for Superman!  We are super in our efforts!” said Councilman Wingo.  -Reported by Dahveed Muhammad