From Watts yesterday to Ferguson today, Riots and Resistance

(L) In this Aug. 12, 1965 file photo, demonstrators push against a police car after rioting erupted in the Watts district of Los Angeles. It began with a routine traffic stop 50 years ago this month. The Watts riot broke out Aug. 11, 1965. Photo: AP Wide World Photos (R) Demonstrators in Ferguson, Missouri confront riot police on the one year anniversary of Michael Brown’s killing by a White police officer. It began with a confrontation over jaywalking, blossomed into a protest and escalated into a destructive riot. Photo: MGN Online

LOS ANGELES – Fifty years after Blacks in Watts rose up against police brutality, protests over the police killing of Michael Brown, Jr. in Ferguson, Mo., underscore the fact that a Black refusal to bow to White oppression remains.

On August 11, 1965, a White California highway patrol officer stopped Marquette Frye and his brother near their home on suspicion of drunk driving. When their mother arrived on the scene reportedly to claim her car, a struggle ensued and escalated to police beating and arresting all three. Six days of violence, protests and property damage followed in protest.

Fast-forward to Ferguson August 10, 2015, when approximately 2,000 demonstrators challenged police and orders to get off the streets during a state of emergency. Tensions were already high as protesters had been gathering under armed police watch to commemorate the one year anniversary of Ferguson police officer Darren Wilson’s shooting of Michael Brown, Jr.

Michael Brown, Sr. (left) at event in Ferguson, Mo. with a supporter on the one year anniversary of his son’s killing. Photo: Cartan X Mosley

Tensions escalated after police shot 18-year-old Tyrone Harris, Jr., claiming he was involved in a gunfight with others on West Florissant Avenue, where the year before, protesters outraged over young Brown’s death, rose up.

In Los Angeles, the community joined the family of Ezell Ford at a vigil and other events to mark his death at the hands of two Los Angeles Police officers August 11, 2014.

“It’s kind of hard when you see things going on, such as my son’s murder, such as Sandra Bland, such as Mike Brown, and it seems that people see, but they don’t really see. They hear, but they don’t really hear. They’re just blinded by this ‘the police can do no wrong thing,’ and it’s really far from the truth, you know,” said Tritobia Ford, Ezell’s mother.

Like 18-year-old Brown, her son was killed while walking home. He wasn’t bothering anybody, but wound up dead, Ms. Ford lamented.

LAPD Inspector General Cruz Bustamante cleared officers Sharlton Wampler and Antonio Villegas in her son’s shooting, as did Chief Charlie Beck. However, the LAPD Police Commission found Ofc. Wampler acted outside of department policy and that the other officer was justified. But, the commission has no power to act on its findings, activists noted.

“I worry every day, because I have five other boys and I’m very worried for them because there are no changes. Things are not changing! They want to make us think that things are changing and getting better, but it isn’t. It’s getting worse,” Ms. Ford insisted. 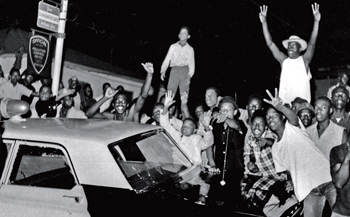 In this Aug. 12, 1965 file photo, demonstrators push against a police car after rioting erupted in the Watts district of Los Angeles. It began with a routine traffic stop 50 years ago this month. The Watts riot broke out Aug. 11, 1965. Photo: AP Wide World Photos

Francisco Charo Romero, a community activist, said the Watts Rebellion represents the first stage in the new era of criminalization of Black and Brown people and mass incarceration.

“We believe that it’s worse than it was 50 years ago, because the systemic criminalization has fine-tuned itself to the point where it’s become almost acceptable that it’s okay for a Black man to be killed every 28 hours,” Mr. Romero told The Final Call.

But unlike the Black community which has tried to keep a daily track of police, vigilante or racist killings, the Central American community doesn’t know how many have been killed, he said.

Perhaps the most effective thing that has happened since the Watts Rebellion is the illusion of progress, according to the activist. “You have people of color—Black or Brown—mayors, chiefs, supervisors, district attorneys, right, the local district attorney is Black, but really, did that change anything?” he asked. He labeled the so-called progress “new colonialism.” 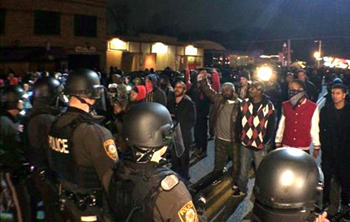 Demonstrators in Ferguson, Missouri confront riot police on the one year anniversary of Michael Brown’s killing by a White police officer. It began with a confrontation over jaywalking, blossomed into a protest and escalated into a destructive riot. Photo: MGN Online

“It’s putting Black and Brown faces in the right places to trick our community that we’ve made progress, when in fact, our conditions have worsened,” Mr. Romero told The Final Call during the “Community Control Over the Police” conference at Santee High School in Los Angeles on Aug. 9.

He hailed the event for providing the critical space needed for people to reflect on the Watts Rebellion and to plan. He also paused to recognize the 34 people killed during the uprising. “There were actually bodies on the streets. The National Guard was deployed, $40 million in property destruction, nearly 4,000 people arrested,” Mr. Romero said.

“When the National Guard was deployed here, it never left, and now this whole thing about the militarization of police forces is a daily occurrence in Black and Brown communities,” he said.

“The quick and dirty on then and now is that there is no difference,” asserted Larry Aubry, a syndicated columnist and member of the Black Community, Clergy and Labor Alliance.

“Education’s in the tank. It was in the tank then. It’s in the tank now. Housing is about the same, and of course police abuse is imperceptibly different,” Mr. Aubry stated.

The reasons for the Watts Rebellion, such as barriers to Black and Brown participation in society remain, and that has to do with White privilege and racism.

“That’s not a condemnation of individuals. That’s a statement of fact. This country was built on violence, annihilated practically the Native American population,” Mr. Aubry said.

In additional to governmental neglect, he said, the Watts community itself had a role to play in leading up to the Watts Rebellion. “No other group, none in history practically, was stripped of family, culture, language … and many of the folks internalized this down through the years and even now, so sometimes you have people being complicit in their own oppression,” he said.

According to Cliff Smith a-k-a Jubilee Shine, co-organizer of the “Community Control Over the Police” conference, the agencies people are relying on for police accountability simply don’t have disciplinary powers. 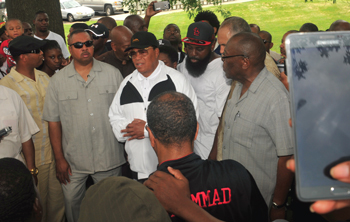 That’s why 50 years after the Watts Rebellion, the community finds itself locked into the same crisis, except the traffic stops have increased and are more deadly, activists said.

Mr. Smith cited Newark Mayor Ras Baraka’s executive order enacting the city’s Police Civilian Complaint Review Board as proof communities can gain control over the police who swear to protect and serve them.

“Arguments are that California state constitutions don’t allow for outside bodies like police commissions or Sheriffs Office of Independent Review or other agencies to impose discipline but Newark found a way.

“The determination of the review board in Newark is binding on the chief, unless the chief can prove that there was an error in fact in the investigation, not ‘ahhhh, I don’t like it, not ahhhh, thanks for everything but I don’t agree with it,’ ” Mr. Smith continued.

While Watts was this big focus or epicenter in 1965, traffic stop-related killings across the country, such as Sandra Bland in Texas and Walter Scott in South Carolina, keep happening and drawing national attention.

According to Dr. Maulana Karenga, professor and chair of Africana Studies at California State University-Long Beach, the Watts Revolt grew out of a long history of righteous resistance and revolt.

“The Watts Revolt, as well as revolts in Ferguson and elsewhere, was a collective act of resistance to achieve three fundamental goals and affirm and secure three basic rights: self-determination, self-respect and self-defense, a definition we also used to define Black Power,” wrote Dr. Karenga in an article for the L.A. Sentinel entitled, “Remembering the Watts Revolt: A Shared Condition, Consciousness and Commitment.” He is also the founder of Us and creator of the Kwanzaa cultural celebration.

Skid Row homeless activist “General” Jeff Paige said it’s important to sync and coordinate the energy of resistance that has been growing since 1965 through today’s rebellions. “That’s why I appreciate the Honorable Minister Louis Farrakhan making a national move to bring all that energy together on October 10, 2015,” he said.

“Something’s gotta give,” he and others told The Final Call, “because all across the country, from L.A. to Ferguson, police have strong measures in place to justify their corrupt actions. All the community has are body cameras or other video cameras to help corroborate their stories against police brutality, and without those the people would lose every time,” he said.

“At the beginning and the end of the day, we’ve got the heavens that just continue to bless us as a people, all praise is due to Allah, and the fight is in our DNA. It’s about survival, not hatred towards any other race, but just about surviving as a people. And we’re going to do any and everything we need to do to survive,” Mr. Paige said.