Minister appealed to the Native American community to join “Justice Or Else!” the 20th anniversary gathering of the Million Man March to present its grievances that the U.S. government should address.

by Richard B. Muhammad 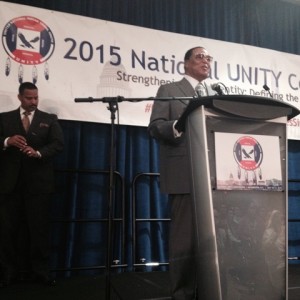 WASHINGTON—The Honorable Minister Louis Farrakhan was cheered and applauded during the annual meeting of UNITY, which stands for the United National Indian Tribal Youth, a group devoted to the development of native young people.
He talked about the value, deep history and longtime oppression of the indigenous people of America and the need for Native American youth to embrace and pursue a deep understanding of who they are to reclaim their land, restore the Red Nation and create future for themselves and their people.

The Nation of Islam minister said July 10 the plight of the Original Inhabitants of this hemisphere, and a people whose origin harkens back to the Originator of the Heavens and the Earth, and the plight of Black people are connected in a single destiny.

“Who are you? What is your purpose?” the Minister asked the crowd assembled in a ballroom at the Renaissance Hotel in downtown Washington, a city whose professional football team has been embroiled in a controversy for its insistence on using a racial slur as the name for the National Football League franchise.
Everything that God created has a purpose and there is no higher creation than the human being, Min. Farrakhan explained. “The most precious knowledge of all is the knowledge of self and the knowledge of God,” said the 82-year-old leader. But self-knowledge and the knowledge of God are one and the same, he added. 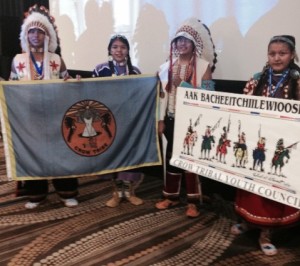 Suicide is a problem among native youth because a stronger connection with God is needed, the Minister said. Man is created in the image of God and with a share of the power of God, he continued. “I don’t have to look for God, I see God when I am looking at you.”

A deep understanding of self and the divine part of self buttresses the ability to withstand and overcome any negative circumstance, the Minister said.

The crowd cheered, applauded, stood and voiced their approval throughout his message. The tribal youth gathering drew 1,800 young people ages 14-24 and some 200 Indian nations were represented. Participants included a delegation of indigenous people from Taiwan and as far away as New Zealand.

Many in the crowd wore traditional dress and carried banners and flags representing their tribes. Yo Nas Da Lonewolf-McCall facilitated the Minister’s appearance at the conference. She is a member of the Nation of Islam, whose mother Wauneta Lonewolf was a respected leader, friend of Min. Farrakhan and helped create relationships between the Nation and the Native American community.

A brief video of the Minister, which highlighted the Million Man March in 1995 and his recognition of and ties with Native Americans, preceded his remarks. It included video of Native American leaders at Nation of Islam annual conventions.

The Native Americans are really one nation and understanding and acting on that knowledge will bring power, said Min. Farrakhan. You have indigenous family members throughout the Americas and around the world, making you a majority, not a minority, Min. Farrakhan declared.

But inside America, millions of acres of native land, desolate places where the Indians were banished by Whites, contain the last of the precious mineral deposits in the United States, said Min. Farrakhan.

Millions of acres are held in trust by a government you cannot trust, under suspect leasing agreements and more is owned by non-Indians, he said.

How can that be? the Minister asked. The weakness of disunity will cause you to lose that little land you are trying to keep, said the powerful leader.

Whites have broken every treaty signed with the native people, gave them smallpox in blankets and pushed them on to reservations beset by alcoholism, drug abuse and poor food, said Min. Farrakhan.

Take control of the land and extract the resources for your own use to build institutions to serve yourself, the Minister urged. 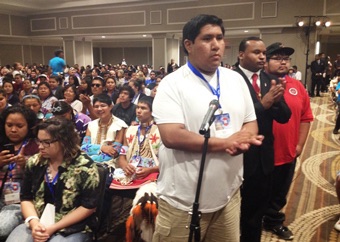 Indian youth must learn engineering and disciplines that will allow them to mine and control the natural resources under their feet, he advised. Master the English language, which isn’t your language or mine, but it is the language of the law and the language used to trick native people, the Minister continued. Never abandon your traditions, original language or original names, said Min. Farrakhan. Learn your original tongue, wear your traditional names proudly and make people respect your culture and your names, he said.

In taking questions, the Minister appealed to the Native American community to join “Justice Or Else!” the 20th anniversary gathering of the Million Man March to present its grievances that the U.S. government should address.

When the Minister thanked the audience for the honor of speaking and said he had to go, the crowd responded with shouts of “No! Stay!” and many rushed forward try to snap a photo of the man who declared his love and loyalty to his Native American family.