Cleveland responds to Farrakhan’s clarion call for ‘Justice Or Else!’

By Justice Or Else!September 12, 2015News
No Comments 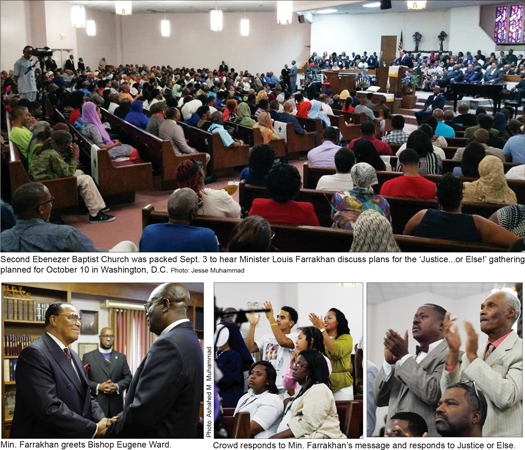 CLEVELAND (FinalCall.com) – When the Honorable Minister Louis Farrakhan visited this city, it was a stop in a place that has experienced perhaps two of the most well-known incidents of the blatant disregard for Black lives in recent memory. 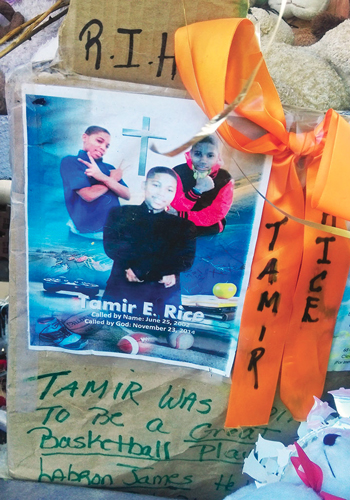 has to be answered for! Malissa Williams, Timothy Russell have to be answered for,” Min. Farrakhan told nearly 2,000 people packed into Second Ebenezer Baptist Church Sept. 3. His visit was part of a national tour to promote Justice Or Else! a major gathering on the National Mall scheduled for October 10th. The Minister is the convener of Justice Or Else!—which includes a demand for an immediate end to police misconduct and killings, an end to fratricidal violence and an immediate end to racial and social injustice.

The Minister was referring to the November 22, 2014, killing of young Tamir Rice, 12, who was playing in a park near the Cudell Recreation Center with a toy gun.  According to reports, a caller reported seeing someone described as “probably a juvenile” brandishing a gun that was “probably fake” to 911. The dispatcher reportedly did not relay that information to responding officers, one of whom was Timothy Loehmann. The 26-year-old rookie shot Tamir less than two seconds after the patrol car pulled into the park. Outrage grew once video emerged of the incident. Tamir died the next day. The coroner listed the cause of death as a gunshot wound to the torso with injuries to major vessels, his pelvis and his intestines. The Cuyahoga County Medical Examiner ruled the boy’s death a homicide.

In the other horrifying notable case, on November 29, 2012, two Black unarmed suspects, Timothy Ray Russell, 43, and Malissa Williams, 30, were killed by police officers who unloaded 137 bullets into the couple’s car after a high speed chase which ended near Heritage Middle School in East Cleveland.

Officer Michael Brelo stood on the hood of the car driven by Mr. Russell and fired shots into the windshield. There were so many deadly shots, a judge ruled it was impossible to say Off. Brelo’s shots took the lives of the victims and therefore acquitted Off. Brelo of charges of involuntary manslaughter and felonious assault.

In three days in the city, the Minister met with spiritual leaders and political officials from the Cleveland metropolitan area as well as with family members of those who have lost their lives while in police custody or due to police officers administering lethal force.

“This is a great city, but it’s a wicked city,” said Min. Farrakhan “Nothing is truly great if its greatness is in roads and buildings and great edifices and highways … that is not how God measures the greatness of a city or the greatness of a nation,” he added.

A nation is measured by 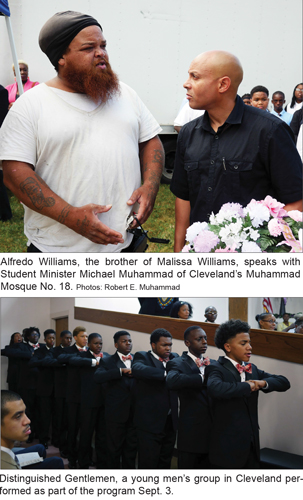 how it treats its poor and most vulnerable, and too many people are homeless, living in poverty and without basic needs. A true man of God is obligated to deliver that message, even if it is not liked by the ruling powers, said the Minister.

“America stands judged! Too many homeless people living under bridges in the richest country on earth,” Min. Farrakhan continued. “A true man of God is not afraid to deliver the message of God even if it costs him his life. This is a day when all false men and women will be sat down.”

As he has stressed repeatedly in warnings to audiences nationwide, the Minister reiterated the right to self-defense to preserve the life that God has ordained.

“No man has the right to take your life and then deny you due process for the redress of your grievance,” said Min. Farrakhan. “I watched that judge with Malissa Williams and Mr. Russell. Shot at a vehicle 137 times—that’s a hell of a lot of shooting.”

To be a member of a police force, one must demonstrate shooting proficiency, some boasting to be expert marksmen, the Minister noted. Hunters know where to shoot an animal to cause the least amount of damage, while still killing it, preserving the body so it can be used or eaten later, he continued. 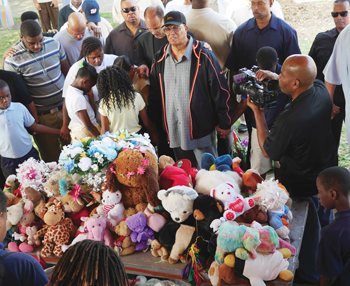 Min. Farrakhan led those gathered at the Tamir Rice memorial in prayer.

“This man is a hunter, but he is a liar and a murderer and the whole system backs him up,” said Min. Farrakhan. “This is a system that has to be taken down in order for the people, Black, Brown, Red, Yellow, and White to experience what God wants every human being to experience. This system can’t bring it. It’s just not constructed that way.”

Those who claim to follow God must hate the world of Satan, he said. Those who gave Black people religion taught them to love everyone—including their enemies—even though Whites never practiced that type of religion.

“Satan always likes to come in the straight path of God to deceive as many in God’s path as he can to make you unworthy of the promise that God has made to you,” said the Minister. “Satan is devouring human beings.”

There is a battle between those who benefit from the continuance of Satan’s world, and those who represent the new world governed by God’s natural laws.

“When Christ comes, he must upset the order of Satan and reset it in the natural order,” said Min. Farrakhan. 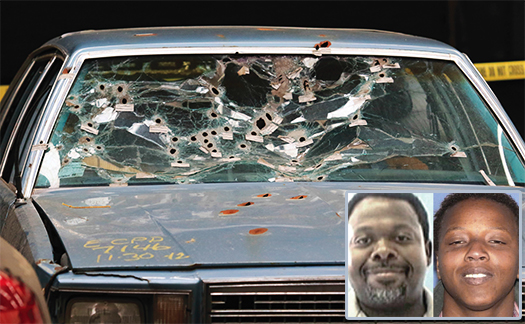 The car driven by Timothy Russell is shown April 10, in Cleveland. Cleveland police officer Michael Brelo, 31, was tried and acquitted on two counts of voluntary manslaughter in the November 2012 deaths of Russell, 43, and Malissa Williams, 30, after a high-speed chase. The defense attorneys, prosecuting attorney and the judge visited the warehouse where the car and two police cruisers involved in the chase were stored. Photo: AP/Wide World photos

The Minister said following the “Justice Or Else!” gathering on Oct. 10, commemorating the 20th anniversary of the Million Man March in Washington, D.C., representatives of the movement will “fan out all over the country” in preparation for Black Friday without Black people. It is part of a holiday spending boycott and economic withdrawal intended to show Black displeasure with injustice and to punish an unjust system and unjust society.

“On Black Friday, they shouldn’t see a Black face,” said the Minister. “Instead of them spying on you while you are shopping, make them look for you because you are not shopping!”

There must be a recalibration of traditional celebrations that take place for Christmas in Black communities, he said.

Bishop Eugene Ward of Greater Love Baptist Church said the Minister’s appearance in Cleveland was an answer to a prayer.  A friend who is a member of the Nation of Islam in West Palm Beach, Fla., told him a little over a month ago during a telephone conversation that Min. Farrakhan was going around the country speaking. After hanging up the phone, he immediately went into prayer and asked, “How can I get Minister Farrakhan here?” Two days later, he received a call from Rudolph Muhammad, a member of the Nation of Islam in Cleveland, who said a place was needed to host Minister Farrakhan who wanted to speak in the city. Tears came out his eyes.

“It is about us as a people becoming tighter and pooling our resources as well as our efforts together to make sure that something gets done in this country. It is Justice or Else!” Bishop Ward told The Final Call. “I’m thankful the Minister was here.  It was an answer to a prayer, and I’m thankful to God for pulling all this together.”

Jonetha Jackson works at Cleveland State University and is pursuing her master’s degree. She called Min. Farrakhan “wonderful” and fully supports the movement.

“He speaks the truth, he doesn’t sugarcoat anything and just tells the plain truth. I’ve always said that we need to take our money out of the oppressor’s hands because we enable them to oppress us when we fund them,” said Ms. Jackson. “I got my fist up and I’m fighting back! Justice or Else!” 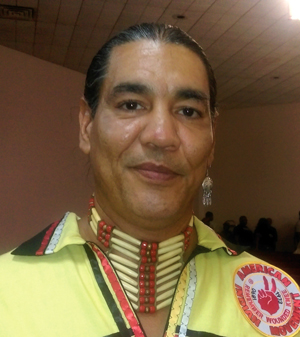 Philip Yenyo,executive director of the American Indian Movement for the state of Ohio, expressed solidarity with Min. Farrakhan’s call for justice.

“I really like the ideas that Minister Farrakhan has about economic sanctions,” said Mr. Yenyo. “Our wealth lies in land, and that land is being taken from us.”

“This movement that he is fostering—especially with the 20th anniversary of the Million Man March—is going to be something really big,” predicted Mr. Yenyo. “This is something that is going to electrify this country, and start unifying us.”

Student Minister Michael Muhammad, who leads Muhammad Mosque No. 18 in Cleveland, said the prayers of the people were answered with Min. Farrakhan’s arrival and guidance-filled messages delivered during the time he was in the city.

“Cleveland responded extraordinarily well, thanks be to God. The people of the city of Cleveland called for the Minister to come and they responded in overwhelming numbers when they knew he was coming,” said Mr. Muhammad. “I know the enemy is thoroughly upset, but that’s good, because they have to know that it is God’s time now and God has come for his people in Cleveland.”