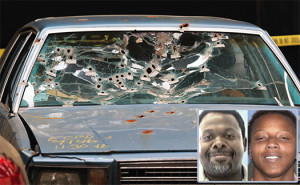 The car driven by Timothy Russell is shown April 10, in Cleveland. Cleveland police officer Michael Brelo, 31, was tried on two counts of voluntary manslaughter in the November 2012 deaths of Russell, 43, and Malissa Williams, 30, after a high-speed chase. The defense attorneys, prosecuting attorney and the judge visited the warehouse where the car and two police cruisers involved in the chase were stored. Inset: Timothy Russell and Malissa Williams. Photos: AP/Wide Wolrd photos

CLEVELAND – A county judge has agreed to dismiss misdemeanor charges against five White Cleveland police supervisors for failing to control a chase that ended with two Black people being killed in a 137-shot barrage of police gunfire. The decision could allow the case to be tried in the predominantly Black suburb where the chase ended and where defense attorneys say prosecutors stand a better chance of winning.

Cuyahoga County prosecutors announced in June that the case would be moved to East Cleveland Municipal Court after patrolman Michael Brelo was found not guilty of manslaughter charges for firing the last 15 shots of the barrage. He was acquitted by the same judge, John P. O’Donnell, who issued the July 24 ruling. An East Cleveland prosecutor filed identical dereliction of duty charges against the supervisors on July 2.

Defense attorneys have accused county prosecutor Tim McGinty of “forum shopping” by moving the case to East Cleveland because that city’s lone judge is Black and a jury pool would be drawn from a population that’s 93 percent Black. They have also said they’re skeptical about claims by Mr. McGinty and his assistants that East Cleveland, a city on the brink of financial ruin, asked to try the case. Mr. McGinty has said the county prosecution team will continue to work on the case and will help the city with trial costs.

Cuyahoga County Common Pleas Judge John P. O’Donnell wrote in his ruling that he agrees with defense attorneys’ assertions that prosecutors are more likely to win in East Cleveland, but said it wasn’t improper.

Defense attorneys also have complained that the move to East Cleveland is a needless delay given that their clients were indicted in May 2014 and a trial had been scheduled to start before Judge O’Donnell in county court on July 27. And they say most of the 22-mile-long chase on Nov. 29, 2012, occurred in Cleveland and only a small portion in East Cleveland, where Timothy Russell and Malissa Williams were each shot more than 20 times by police officers in a school parking lot. None of the supervisors fired their weapons that night.

Defense attorney David Grant said July 24 that he was disappointed with Judge O’Donnell’s ruling and that it would likely be appealed. (AP)