The time is ripe for economic justice – #BoycottChristmas

By Justice Or Else!September 17, 2015News
No Comments 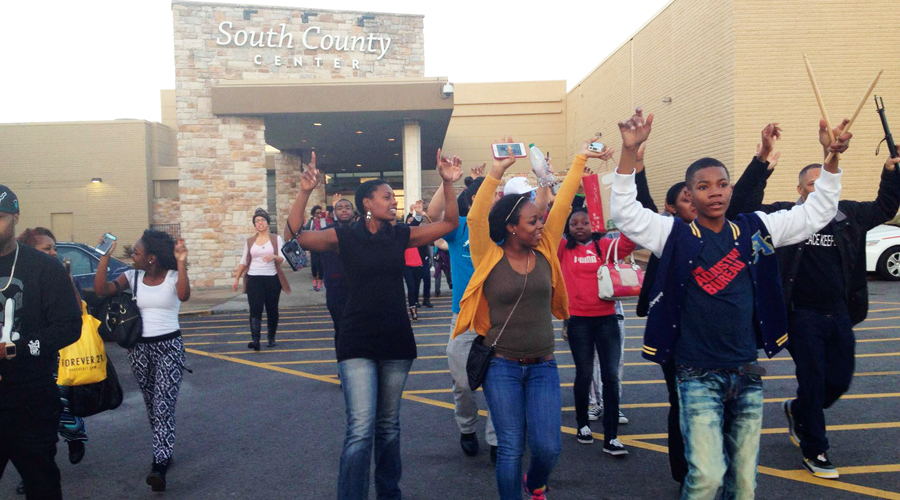 Protesters walk out of mall after shutting down stores in efforts to inflict economic pain as part of strategies to obtain justice. (Final Call, Dec. 29, 2014)

In his call for ‘Justice Or Else,’ the 20th Anniversary gathering of the Million Man March on October 10, in Washington, D.C., the Honorable Minister Louis Farrakhan also called for a boycott of Christmas. Leading experts and economists agree the time is now and the time is ripe for the Muslim leader’s clarion call for economic justice, they told The Final Call.

“Absolutely, the timing is perfect!  I think that Black people in America are reaching another level of consciousness,” said Dr. George Fraser, CEO of FraserNet Inc., which works to increase opportunities, wealth and jobs for Blacks.

The Black Lives Matter movement is pricking the consciousness of Black folks. Black women are even changing their hairstyles to be more natural, and youth—dubbed the Millennials generation—are wearing more dashikis and African garb, Dr. Fraser pointed out as examples of what he sees as a result of an increasing awareness.

He said it reminds him of the 1960s and the Black Power movement, a time when Blacks were really conscious and knew who they were and what they were about.

“From a timing standpoint, from a psychological moment, I think yes, the timing is precisely right.  But I think the timing is always right, but it’s up to the elders,” said the marketing guru. The Black community needs leadership and he feels it’s up to people like him, Minister Farrakhan and others who have generations of consciousness to guide the younger generations, he said.

Minister Farrakhan in various cities around the country leading up to October’s gathering said the plan for economic success had been laid out by Civil Rights leader Dr. Martin Luther King shortly before he was assassinated.  Redistribute the pain Blacks suffer because of injustices in America, particularly the extrajudicial law enforcement and vigilante killings of their men, women and children, he pointed out.

“You’re either going to treat us right, or we’re going to withdraw from you our economic support. … We intend to boycott Christmas but not Jesus,” Minister Farrakhan said during a one-hour interview on September 10 with Roland Martin, host of TV One’s show News One. “We choose not to spend dollars on Black Friday, Black Saturday, Black Sunday, Black Monday.   We are not going to spend our money for the rest of that year with those companies that we have traditionally spent our money on,” the Minister added.

Dr. Fraser echoed sentiments that while the whole notion of economic boycott is not a new idea or notion, it must be constantly repeated.  “This is what Minister Farrakhan is reigniting, this whole consciousness about the effectiveness of economic boycotts in an unjust system in America,” said Dr. Fraser.

Cedric Muhammad, an economist and Forbes contributor, said Minister Farrakhan’s call for economic justice comes at a time when though there’s been progress made over the last eight years under the helm of America’s first Black president, people are more aware that governmental stimulus programs are insufficient to address their pressing needs.

Blacks remain double the national average of those unemployed since the Department of Labor began compiling data in 1972, said Mr. Muhammad.  According to the Bureau of Labor, unemployment statistics, Blacks are at 9.5, compared to Whites (4.7 percent) and Asians (3.5 percent).  And Hispanic unemployment ranked 16.9 percent.

Now that Blacks have exhausted the political option in terms of understanding its limitations, now they can return to a dialogue, consideration and exploration of alternative economic solutions and models, and sustaining them, Mr. Muhammad said.

“Any boycott must be married to a ‘buycott,’” he said, underscoring the Honorable Elijah Muhammad’s Economic Blueprint.  The first things the Nation of Islam patriarch taught is to save five cents a day, then buy land, and then begin to build a banking system, Mr. Muhammad said.

Philip Jackson, executive director of Chicago-based Black Star Project said the battle for economic justice should have been fought a long time ago.  “The Minister’s call for an economic boycott is something that can gain respect for our community in ways that nothing else can,” Mr. Jackson said. Among programs his organization offers Black and Latino youth are presentations on finance and economics.

Because America is the modern home of capitalism, one of the only things she understands is dollars, he said.  Unfortunately, that’s also one of the things that Blacks in America don’t grasp, he continued.  So much so, collectively they lack an understanding of the power of money, how to multiply it, and how to use the power of dollars to get what they need in their schools and communities to help their children, seniors and themselves, said Mr. Jackson, a long-time community activist and convener of the Million Father March, in which Black men take children to the first day of school.

When the Nation of Islam re-launched Muhammad’s Economic Blueprint to End Poverty and Want during Min. Farrakhan’s Saviours’ Day address in February 2013, he asked Blacks to sacrifice five cents a day, 35 cents a week, to create a fund for Black economic development and job creation. That investment by 16 million Black wage earners would net over $291 million in one year. Minister Farrakhan said investing pennies, nickels and dimes would allow Blacks to secure businesses like a 70,000-acre Texas cattle ranch for just $34 million.

Just six cents of every Black dollar is spent in Black businesses but if that was doubled to 12 cents, it would create nearly 600,000 additional jobs for Black workers and reduce Black employment by three percentage points, Min. Farrakhan noted.

But part of the problem has been America’s used Madison Avenue to trick Blacks into spending with others on bad food, cheap alcohol, and junk, according to Mr. Jackson.

“His (Minister Farrakhan’s) picking the holiday season as a time to exert that pressure is perfect.  That’s when America counts our dollars before we spend them,” he said.  And as a matter of course, he continued, other communities throughout America already do what Minister Farrakhan’s asking.