By Justice Or Else!September 24, 2015News
No Comments

Isaiah Muhammad poses with the winner of the Dunk Contest in Baltimore’s Ballin’ 4 Justice.

BALTIMORE – It was a warm, sunny day Sept. 19 at Baltimore’s Cloverdale basketball court, a playground that NBA star Carmelo Anthony has supported over the years.

Relly Jones, a student at a local middle school, had just come off the court. With a broad smile and a sweaty brow, he stated the obvious: “I just came to have fun. I need something to do.”

The 3-on3- basketball event was “Ballin’ for Justice”, sponsored by the city’s Local Organizing Committee (LOC) for the upcoming Oct. 10 Justice or Else! rally in Washington, D.C., a celebration of the 20th anniversary of the Million Man March. The basketball event recognized the tragic death in police custody in April of Freddie Gray and the unrest and tension in the city since the event.

Baltimore F.O.I. First Officer Isaiah Muhammad of Muhammad Mosque 6, Matthew Muhammad of Washington’s Mosque 4 and Rashidah Muhammad of Mosque 6 worked with the LOC and the Baltimore Parks and Recreation Dept. to make the basketball event possible. Many in the crowd spoke of how peaceful and fun it was.

This year the city has seen one of the highest murder rates in years. The Baltimore LOC has been active since early summer to bring life and energy to Black neighborhoods. Each event focuses on promoting the Oct. 10 rally and the call for Justice or Else! 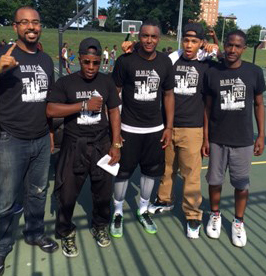 The peaceful Baltimore event ran until the sunset. The work of the Baltimore LOC has shown that when events focus on lifting the people then there is trust and hope.

Baltimore is on fire for the 10.10.15 rally and looks forward to being well represented in Washington at the call of Justice or Else.

During the Oct. 10 rally in Washington, the Honorable Minister Louis Farrakhan will uplift names of those killed unjustly while in police custody as well as recognize heroic leaders who fought for Black liberation but were either vilified or killed by Whites and the government to stop Black progress. He will explain the consequences of justice denied as well as lay out a plan for Black America to become more self-sufficient.   –Reported by Bro. Anthony J. Pena 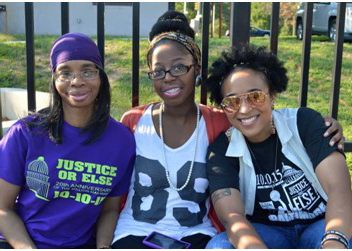 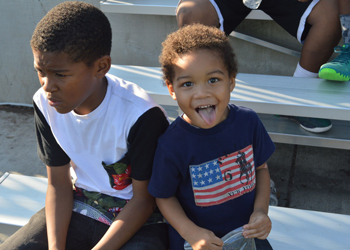 The Joshua generation sits and enjoys the free tournament.