By Justice Or Else!August 3, 2015News
No Comments 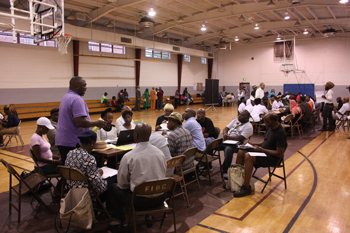 Enthusiastic members of the Atlanta Local Organizing committee met to plan the week’s activities to mobilize for Justice or Else.

ATLANTA – The more than 150 community leaders who attended the July 21 meeting of the Local Organizing Committee (LOC) for the 20th anniversary of the Million Man March had one goal in mind – spread the word about 10.10.15. That’s the date in October that several million people are expected to converge on the National Mall in Washington, D.C., to declare to the American government to give Black and oppressed people “Justice, or Else!”

Student Minister Abdul Sharrieff Muhammad informed the gathering that the Honorable Minister Louis Farrakhan, who will convene the gathering, had just left Ferguson, Mo., where he laid a wreath at the spot where Michael Brown was murdered by police – sparking the “Black Lives Matter” movement — and spoke to residents from the community.

Min. Sharrieff told the audience that October 10 will not be a time of frivolity, but one of making serious demands. He also called upon supporters to help defray the costs of the monumental event by donating at the JusticeOrElse.com website.

Rev. Timothy McDonald talked about the meaning of the event’s theme, “Justice or Else!” so that “everyone would be on the same page” when going out to invite the community to attend. 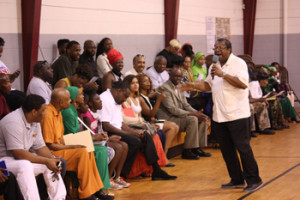 Each LOC committee met to plan the week’s activities. The committees include finance, outreach, publicity, issues, transportation and youth.

The transportation committee reported that buses have been secured with two Black owned companies and tickets will be for sale.