Another police execution in Cincinnati #JusticeOrElse

“Everyone has the right to life, liberty, and security of person.”
–Universal Declaration of Human Rights
“No one shall be arbitrarily deprived of his life.”
–International Covenant on Civil and Political Rights 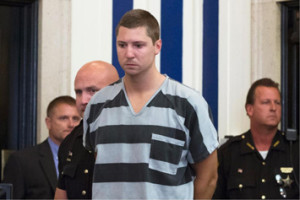 According to investigators, 43-year-old Samuel DuBose was shot in the head and killed by then-University of Cincinnati police officer Ray Tensing after a routine traffic stop. Mr. Dubose was pulled over for having a missing front plate. A Hamilton County grand jury returned an indictment of murder and voluntary manslaughter against Mr. Tensing, who was also fired from the police department.

Outrage spread as the video of the fatal encounter was made public. Mr. Tensing turned himself in to authorities and during his initial court appearance July 30, bond was set at $1 million after he pleaded not guilty. He paid the required 10 percent ($100,000) to bond out. He is now free awaiting trial.

“This does not happen in the United States—this might happen in Afghanistan or somewhere. People don’t get shot for a traffic stop unless they are violent towards the police officer, and he wasn’t,” Hamilton County Prosecutor Joe Deters told reporters.

But the prosecutor wasn’t quite correct as experts say the unwarranted and illegal killings of civilians is a problem in the United States, where law enforcement agencies often fail to respect civilian lives. 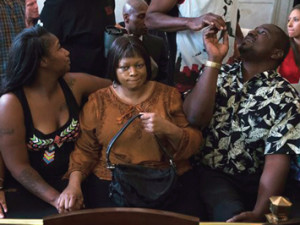 Palestinian-American activist and commentator Linda Sarsour linked the Dubose killing with other instances where Blacks accused of minor crimes paid the ultimate price. “Selling loosies, driving without a license, not using your car signal ARE NOT punishable by death. #SandraBland #SamDubose #EricGarner,” Ms. Sarsour wrote.

A new report by Amnesty International USA concluded all 50 states and the District of Columbia fail to comply with international standards on the use of lethal force by law enforcement.

Human rights activists say lethal force should be used as a last resort when all other methods have failed. But in American cities officers are shooting first, then asking questions or are involved in cover-ups later, they said.

Amnesty’s report “Deadly Force: Police Use of Lethal Force In The United States” found state laws and regulations are overly broad, allowing police to use lethal force in a wide range of circumstances with very low standards for justification.

“I would say it is a crisis because it violates the right to life, the ultimate human right,” said Mr. Coverson. “It is a crisis that we have to get a handle on—around the country—as soon as possible.”

Only three states require that officers create no “substantial risk” to bystanders when using lethal force—Delaware, Hawaii and New Jersey.

Nine states and the District of Columbia have no laws on the use of lethal force—these include Maryland, Wisconsin, Massachusetts, Michigan, Ohio, South Carolina, Virginia, West Virginia, and Wyoming.

Blacks are disproportionate victims of lethal force by police. An officer guns down an unarmed Black man, outrage grows within the community, and predictably civic officials, political and church leaders call for calm.

But instead of pleading for calm, why not deal with the issue at hand, the rampant use of lethal force on unarmed civilians, and the lack of justice? And the victim’s side of the story is often never heard.

“All citizens, regardless of color, ethnicity, or religion, have the right to expect fair and unbiased treatment from their community’s police officers. Police profiling and killing of community members without cause is a very serious problem that destroys trust between police and the communities they are sworn to protect,” observed Ms. Dabdoub.

While most commended the Hamilton County, Ohio prosecutor for swift action in charging the former officer with murder, others believe officials have not gone far enough. Only a murder conviction will be true justice, they say.

They also believe other officers who corroborated the initial story, which appears to be false based on the video, should be disciplined in a major way.

As one of only two Black students in the architecture program, she’s not often able to verbalize her feelings or share her opinions with those who can understand and empathize with her.

“It’s a peculiar experience for me … the mental anguish,” said Ms. Dixon. “I almost feel like I’m living in my own world when it comes to these things.”

The Dubose family has hired Florida trial attorney Mark O’Mara, who is best known for representing George Zimmerman in the Trayvon Martin case.

A statement on the University of Cincinnati website said the school “is providing all legally allowable information to the public” and has met with students, members of the community and members of the Dubose family.

“Because this tragedy calls for close inspection, the Cincinnati Police Department investigated and turned over its findings to the Office of the Hamilton County Prosecuting Attorney for a determination,” the statement said.

The university announced immediate changes to campus police patrolling policies after the fatal shooting. Campus cops will focus patrols within campus boundaries, and will conduct traffic stops only within the boundaries of the campus. According to campus officials, the Cincinnati Police Department has agreed to increase patrols in areas just outside campus boundaries until further notice.

“As the result of multiple conversations this past week with community leaders, which were reiterated this morning, the university is initiating a process to hire an independent external reviewer to examine UC Police Department policies, procedures and practices. We also are moving forward with the creation of a community advisory panel. These are important steps to create an enhanced environment of openness and healing,” said President Ono.

There were some campus protests, however, as city and university officials prepared for the worst with the July 29 announcement that body camera video of the killing would be released. Realizing it would be a tense time, the University of Cincinnati canceled all classes and closed administrative offices on the Uptown and Medical campuses at 11 a.m. and suspended classes that were in session.

Initial media reports said Officer Ray Tensing was dragged. That appeared to be false after looking at the video. It appeared as if the officer fell only after shooting Mr. Dubose in the head. Activists and Mr. Dubose’s family members want charges filed against other officers who went along with Mr. Tensing’s original report.

Hamilton County Prosecutor Deters spoke to reporters July 29, saying in his three decades of experience, the officer’s actions July 19 were “horrible” and “unnecessary.” He expressed sympathy for the Dubose family.

“This is the most asinine act I’ve ever seen a police officer make. Totally unwarranted. It is an absolute tragedy that in the year 2015 that anyone would behave in this manner. It was senseless,” said Mr. Deters. “He should have never been a police officer.”

It was incredible how quickly the officer pulled his weapon and discharged it, said Mr. Deters.

Student Minister Darryl Muhammad of Mosque No. 5 in Cincinnati said while the indictment is a step towards justice, there have been problems with University of Cincinnati police and the Cincinnati police for years. Rebellions broke out in 2001 after police killed Timothy Thomas, an unarmed 19-year-old Black man. This same prosecutor’s failure to charge police with wrongdoing, outraged the Black community, which led to the rebellion, Mr. Muhammad asserted. The unrest covered four days in 2001 and caused an estimated $3.6 million in damage to businesses and nearly $2 million in damage to city property. A boycott of businesses after the rebellions caused an  estimated $10 million in revenue losses.

“The Hamilton County prosecutor is definitely no friend to the Black man and woman here in the city of Cincinnati,” said Mr. Muhammad. “He does not have a good history in the city.”

According to Mr. Muhammad, in the past, the prosecutor has referred to Blacks as “soulless,” “cowards,” “criminals,” “thugs” and “breeders.”

The Nation of Islam has consistently been involved in meetings with other community organizations and police in attempts to quell violence, and according to Mr. Muhammad, this recent shooting has motivated Muslims to intensify their efforts.

At a recent rally near campus, Imani Dixon heard two of Mr. Dubose’s children speak. One was Mr. Dubose’s  9-year-old son. She described it as “heart-wrenching.”

Many artists, entertainers, and activists took to their social media accounts to weigh in on the matter.

Karen Dabdoub, executive director of the Cincinnati chapter of the Council on American-Islamic Relations (CAIR), delivered a tepid statement related to the Dubose killing.

Hip hop artist Talib Kweli insightfully posted via his Twitter feed: “Cop murdered #SamDubose & his fellow officers lied right along with him in police report. What was that you were saying about ‘good cops?’ ”

Writer and political commentator Rahiel Tesfamariam wrote: “The 2nd officer should be charged with obstruction of justice for lying for Ray Tensing. Charges must be brought against him! #SamDubose.”

Most believe without the body cam footage, there wouldn’t have been an indictment, and Mr. DuBose’s death would have been merely classified in police terms as “justifiable.”

Leading Black Lives Matter organizer Johnetta Elzie, via her Twitter account posted: “even with a body cam recording his interaction, Ray Tensing was prepared to lie and get away with murder. #SamDubose.”

His advice to young Black men and women he has encountered? If stopped by police, do what is required to get home alive. In this country police are given tremendous power, and while human rights groups are addressing these issues, “reform is multidimensional” and often takes time, he added.

Seeing police encounters in real time with video captured by dashcams and smartphones has changed some opinions, but, there are still vastly differing perceptions regarding the value of Black lives, noted Mr. Coverson.

“There’s still a major part of the population that still believes (Black’s killed by police) deserved what happened to them,” he said.