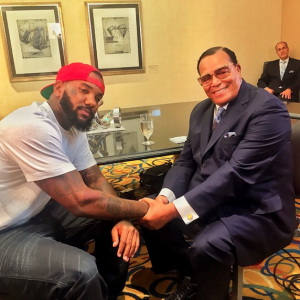 Earlier this week, Game had a meeting with Minister Louis Farrakhan to discuss the upcoming 20th anniversary of the Million Man March. The two are working together to lead a commemorative march in Washington D.C., October 10.

“Spent the early part of my day with the Honorable Minister Louis Farrakhan getting a bit of spiritual enlightenment as well as preparation for our march on Washington D.C.,” he wrote on Instagram. “This October 10th 2015 for the 20th anniversary of the Million Man March…. This time were coming for #JusticeOrElse.”